As part of the completion of our course we have each contributed to a Class Blog.

My entry is available here.

Thor is the Norse God of Thunder. He is the son of Odin, the All Father and Jord, the Earth Mother. As a God, Thor is a member of the Aesir, the principal Gods that lived in Asgard from where they ruled Midgard (Earth) and controlled the lives of mortal men. 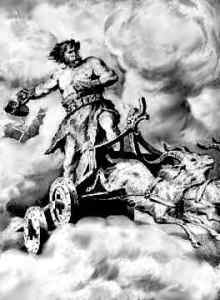 Thor was the strongest of all the Gods, though his strength was amplified further by his wearing of a magic belt called Megingjard. He also is described as having worn steel gauntlets or gloves with which to carry his magic warhammer Mjolnir.  Thor has also been depicted travelling across the heavens and along the Rainbow Bridge in a chariot pulled by two goats; Tanngrisni (“gap-tooth”) and Tanngnost (“tooth grinder”). By throwing his hammer Thor would create thunder and lightning. In this way he was able to protect his lands.

Thor had a long enmity with the Giants that fought against Asgard but his true enemy is Jormungand, The Midgard Serpent. It is said that at Ragnarok Thor and Jormungand will fight to the death, Thor will prevail but will be poisoned and die from his wounds. END_OF_DOCUMENT_TOKEN_TO_BE_REPLACED